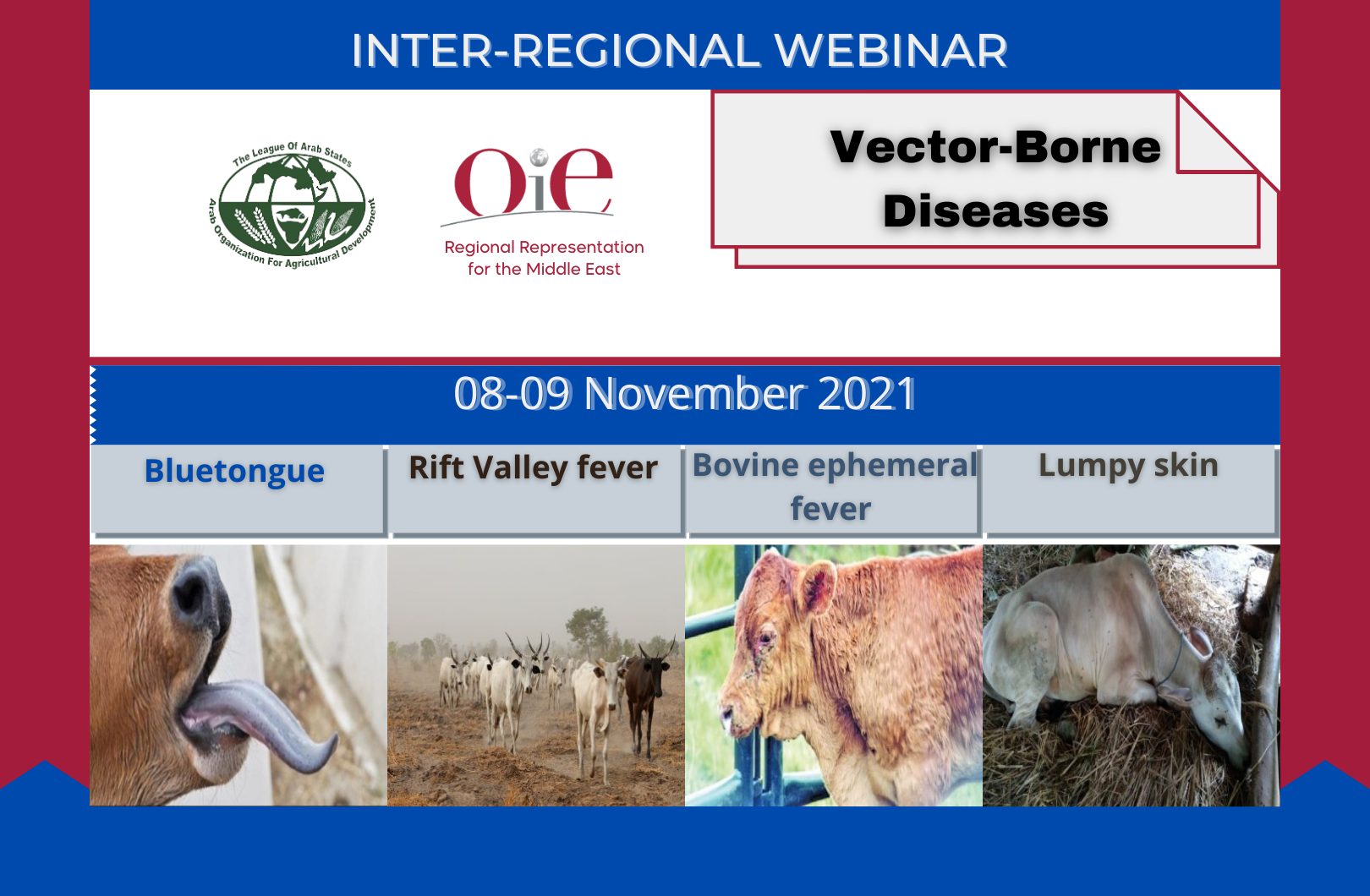 Organised jointly by AOAD, in collaboration with the OIE regional representation for the Middle East and technical assistance provided by EuFMD

Vector borne diseases (VBD) are considered as most serious diseases because of the various vectors, which are a living organism having the ability to transmit the disease at a large scale in shorter time and among different living beings (animals, birds, and humans). Treatment of VBD is difficult and prevention necessitates essentially a clear understanding of the vector activity and measures for its elimination.

The most important vector from all vectors is Mosquito, which is found all over the world. Among others, two major groups of mosquitos in relation with diseases transmission are: Culex (West Nile Fever), Aedes (Rift Valley Fever).

Vector Borne Diseases in most countries, based on the history of the disease and retrospective data available, the hotspots for outbreaks are known and can be targeted for surveillance activities. There are also sufficient knowledge of the ecology and epidemiology of the disease and its vector available,

However, the early warning surveillance should always include meteorological monitoring as well as vector activity monitoring. Surveillance protocols should be adjusted to this knowledge and should also include monitoring of sentinel herds.

VBD surveillance is usually heightened and triggered when forecasts of favorable/predisposing environmental phenomenon in particular predictions of excessive rainfall and floods. The application of meteorological data and information of the VBD early warning mechanism enhances the efficiency and effectiveness of surveillance system.

In an exporting country, there should be enough incentive to carry out surveillance to maintain this status. Surveillance teams should be readily available, and the surveillance results should be communicated in a clear, transparent, and rapid manner.

Countries are invited to translate the revised OIE code chapter into their national legislation and regulations and reinforce its application, to facilitate trade. They are invited to exchange information with trading partners on the disease situation in their countries.

A WORKSHOP on VBD will be organized jointly by AOAD, and the OIE regional representation for the Middle East and technical assistance provided by EuFMD.

The WORKSHOP will highlight the role of selected vectors in transmitting diseases to Humans and Animals and the related pathogen activity.

The WORKSHOP will also, discuss the pathogenicity of the most important VBD circulating in the region, and their impact on the economy, trade, and the livelihood of the population taking into consideration measures of prevention described in the OIE animal health Code and Manual.

4 diseases are selected as representative of many others disseminated in the region: Bluetongue, Rift Valley Fever, Bovine ephemeral Fever, and Lumpy Skin Disease.

Countries should consider conducting the surveillance activities for Vector-Borne Diseases, which are often project based, in a sustainable manner over longer time periods.

Government should commit to continuously using risk analysis studies, early warning systems, and climate forecasting programs, for contingency planning even for a disease that occurs only sporadically. In addition, willingness at a local level to carry out such activities should also be strengthened.

Human and financial resources to carry out surveillance, capacity building of surveillance Teams, should be enforced.

Entomological studies, and research on the activity of various vectors and the means of preventing their impact, should be promoted.

Countries should have a good legislative framework for quarantine stations. Implementation of the relevant OIE standards represents the ideal solution if applied wisely.

Countries to consider the availability of effective insecticides and larvicides. Avoiding residual effect on the environment, and resistance of the vectors.

According to the role of the Arab Organization for Agricultural Development (AOAD) in combating diseases, the Arab Organization for Agricultural Development works to support the efforts of Arab countries in implementing national control strategies for animal diseases, especially transboundary diseases by raising the efficiency of veterinary authorities in the field of TADs surveillance monitoring, early detection and response For emergency and risk management to prevent cross-border movement to access safe trade for live animals and their products.