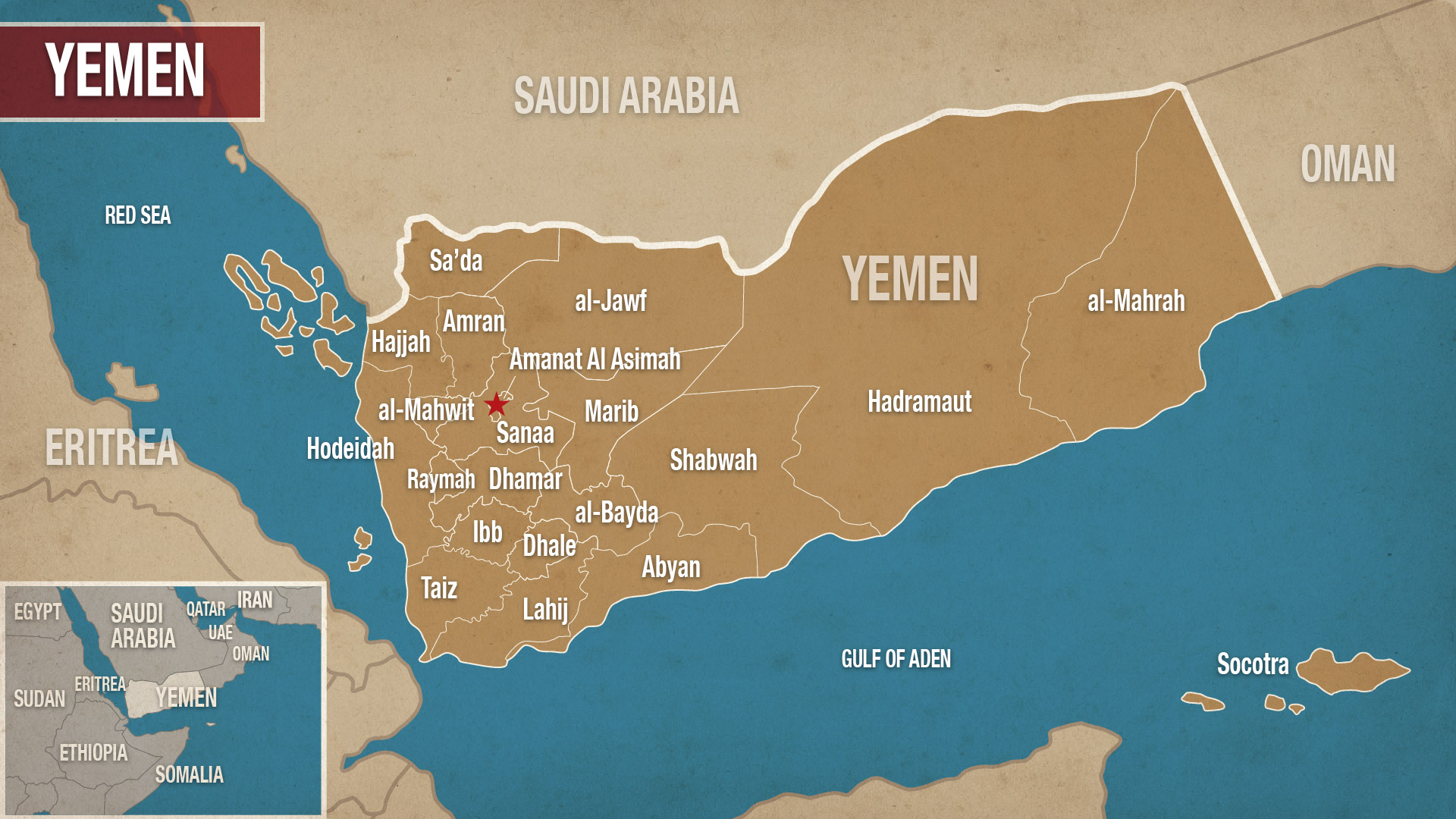 Yemen, with a total area of 527 970 km2, is located on the south-western edge of the Arabian Peninsula. Apart from the mainland it includes many islands, the largest of which are Socotra in the Arabian Sea and Kamaran in the Red Sea. The country is bordered by Saudi Arabia to the north, Oman to the east, the Arabian Sea and the Gulf of Aden to the south, and the Red Sea to the west. The present Republic of Yemen was created in 1990 as a result of the unification of the former Yemen Arab Republic (YAR) and the People’s Democratic Republic of Yemen (PDRY). The country is divided into 21 administrative governorates, including the three newly created governorates Amran and Al-Daleh, created in 2000, and Raimah, created in 2004.

The cultivable land is estimated at 3.62 million ha, which is 7 percent of the total area. In 2004 the total cultivated area was 1.19 million ha, compared with 1.05 million ha in 1994, of which 81 percent consisted of temporary crops and 19 percent of permanent crops. The main crops were cereals, covering about 686 000 ha (58 percent of the total cultivated area), and qat, covering 122 844 ha (10 percent). Farm size, including both rainfed and irrigated agriculture, is generally very small: 62 percent of farms have less than 2 ha, while only 4 percent cover more than 10 ha.

Geographically, the country can be divided into three physiographic regions: the western, the eastern and the southern escarpment. Cultivated areas are mostly silty, with a high degree of heterogeneity, both laterally and vertically. Lower wadi reaches are extensively affected by blown sand, which tends to form dunes. The wadi soils are alluvial deposits, mostly consisting of fine sands and silts, which may reach several meters in depth. Agricultural soils have a high pH of about 7.8 to 8.0, very little organic matter and are nearly always deficient in nitrogen and phosphorus. Most of the land areas in the highlands are steep, rugged and badly eroded as a consequence of overgrazing and removal of woody vegetation. Agriculture is restricted to hillside terraces and riparian farms on the sides of the wadis, which range in size from a few meters to more than 100 meters, depending on the geologic and geomorphic features of the wadis. Soils captured by terraces show profiles of varying depths and morphology.

Agriculture
Agricultural production is the single most important contributor to Yemen’s economy, accounting for 20 percent of GDP. The agricultural sector provides approximately 58 percent of the country’s employment. The labor-intensive sector is largely underdeveloped and inefficient, as a result of soil erosion, the high cost of credit and land, a lack of investment, and the scarcity of water. Most of the cultivated land is irrigated and dependent on groundwater, but high demand could exhaust water supplies by 2008. Although agricultural output has increased steadily in the past few years, crop yields remain low relative to those produced by comparable countries.

Major agricultural products include fruits, vegetables, and cereals, but production is rarely sufficient to meet domestic demand. As a result, Yemen continues to import most of its food. Yemen also cultivates qat, a mildly narcotic plant indigenous to Africa. Although legal, the government has recently moved to ban its consumption in public offices and on army duty due to economic and social costs associated with those under the influence. It continues to be widely consumed, and future efforts to ban it are unlikely.

Livestock
Yemen’s livestock appears to comprise at least 11 breeds of sheep, 5 breeds of goat, 2 breeds of cattle, 4 breeds of camel, 2 breeds of a donkey and 1 breed of horse. There are no data on breeds of poultry but domestic fowl (where considerable diversity exists) and pigeons are kept. There is little formal information on the history and relationships of most breeds. Some appear to be of ancient local origin, whereas others show affinities with those of neighboring and other countries. None of the identified types is considered endangered, so conservation would be premature. A more formal and detailed genetic characterization, to add to the large morphological and traditional classification, may, however, reveal such a need.

Plants and Animals
The distribution of vegetation roughly corresponds to the zones of elevation and precipitation. It is possible to distinguish three general regions: (1) the coastal plain and its wadis, in which dry-climate plants such as the date palm, citrus fruits, banana, and cotton as well as spurges (euphorbia), acacia, and tamarisk predominate (the dry wadis of the eastern desert support similar flora), (2) the middle highlands, with a variety of such food crops as melons, nuts, grapes, and grains, as well as various spurges, eucalyptus, sycamore, fig, and carob, and (3) the mountainous interior, with its temperate-zone crops, including coffee, the mild stimulant khat (qāt), and a variety of woody shrubs and trees. Yemen retained considerable forest cover into the early years of the 20th century. However, the pressures generated by rapid population growth—notably the increased demand for stove wood and agricultural land—largely depleted the forest legacy. In the early 21st century a negligible amount of forest cover remained.

These same human pressures have had a devastating effect on Yemen’s wildlife. Evidence suggests the presence of such species as a panther, ostrich, various antelopes (including the Arabian oryx), and large cats (e.g., lions) as recently as a century ago; some species of panther and antelope, which persist in Yemen, are threatened, surviving in limited numbers. One of the largest wild mammals still widespread in Yemen is the hamadryas baboon (Papio hamadryas), though its numbers to are said to be diminished; among the smaller mammals are the hyena, fox, and rabbit. In two categories of wildlife—birds, and insects—Yemen has a relatively abundant and varied population; many species remain uncatalogued. Probably the greatest diversity of fauna, however, inhabits the waters of the Red Sea, the Arabian Sea, and the Gulf of Aden. Among the many different species are tuna, mackerel, shark, sardines, lobster, shrimp, and squid.

Climate
The climate is semi-arid to arid. Rainy seasons occur during the spring and the summer. Rainfall depends on two main mechanisms: The Red Sea Convergence Zone (RSCZ) and the monsoonal Inter-Tropical Convergence Zone (ITCZ). The RSCZ is active from March to May. Its influence is most noticeable at the higher altitudes in the western parts of the country. The ITCZ reaches Yemen in July-September, moving north and then south again so that its influence lasts longer in the south. Rainstorms observed during the winter months of December and January are attributed to the influence of the Mediterranean Sea.