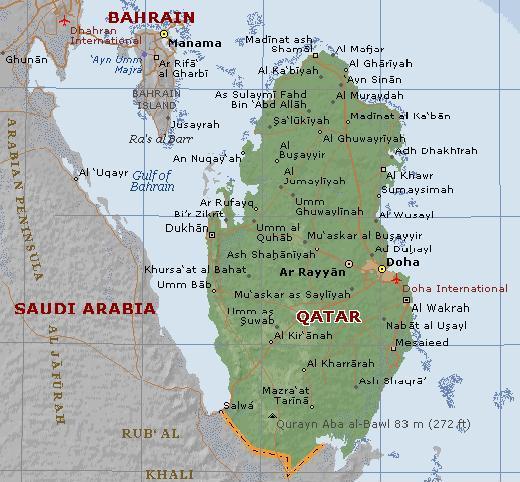 Qatar and capital Doha, is a small peninsula in the Persian Gulf covering an area of approximately 11 000 km2 including several small offshore islands. Its maximum length is about 180 km along the north-south axis, while the east-west width is 85 km at its widest point. It is bounded by the Persian Gulf on all sides except in the south where it touches the eastern province of Saudi Arabia.

The elevation of the country decreases from 100 m above sea level in the south to less than 50 m in the north. Qatar is a rocky desert area with scattered oases formed by 850 separate depressions. In these depressions colluvial soils made up of calcareous loam, sandy loam and sandy clay loam have accumulated to depths ranging from 30 to 150 cm, overlying limestone debris and bedrock. These depression soils are locally known as rods and constitute the main agricultural soils of the country. Highly saline depression soils, locally known as sabkha, occur mainly along the coasts of Umm Said, Dukhan and the southern boundary of Qatar. In southern Qatar the depressions are often more craterlike in appearance, with the bottoms usually covered by aeolian sands.

The total cultivated area is 6 322 ha, including 67 ha of greenhouses. The total area of arable land is 2 651 ha, which includes 1 190 ha of vegetable crops and 1 461 ha of field crops. The area under permanent crops amounts to 3 412 ha and comprises 1 478 ha of perennials and forage crops and 1 934 ha of fruit trees (DAWR, 2002). The land suitable for irrigation is 52 128 ha and most of it is classified as having marginal suitability for irrigation (Awiplan Qatar & Jena-Geos, 2005). All cultivated areas are irrigated thus representing 12.1 percent of the land suitable for irrigation.

Agriculture
Agriculture in Qatar is inherently limited in scope due to the harsh climate and lack of arable land. Despite this, small-scale farming, nomadic herding, and fishing were the predominant means of subsistence in the region before the 20th century. Sea-based activities such as pearling and fishing served as the primary sources of income for Qataris until the commencement of oil drilling in 1939.

Although the relative importance of these activities has declined as a means of livelihood (with commercial pearling disappearing completely), the government has attempted to encourage agriculture and fishing to provide a degree of self-sufficiency in food.

Farming currently plays only a minor role in the economy. Of the 8,312 ha. of arable land in 1994, 2,345 ha. were used to cultivate permanent crops, while 5,987 ha. were used to grow annual crops. Date palms were the most abundant permanent crop.[3] Root vegetables such as carrots, potatoes, onions and fodder beets are also some of the most important crops produced by Qatari farms.

Between 1960 and 1970 agriculture grew. The number of farms, for example, increased fourfold to 411. Qataris who own agricultural land or properties generally hold government jobs and hire Pakistanis, or non-Qatari Arabs to manage their farms. The government operates one experimental farm. Of land under cultivation in 1990, about 48 percent was used for vegetables (23,000 tons produced), 33 percent for fruit and date production (8,000 tons), 11 percent for fodder (70,000 tons), and 8 percent for grains (3,000 tons). In 1990 the country had approximately 128,000 head of sheep, 78,000 goats, 24,000 camels, 10,000 cattle, and 1,000 horses. There are also dairy farms and about 2,000 chickens for poultry. All but 20 percent of local demand for eggs is met domestically. Despite the encouragement of agriculture and fishing, these two elements of the economy together produced only about 1 percent of the gross domestic product in 1989.

In July 2017, following the closure of Qatar’s only land border with Saudi Arabia, the country announced plans to airlift 4,000 cows in a bid to meet around one-third of its dairy demand. Local company Baladna will be responsible for dairy production. Later, Baladna announced that it will be importing an additional 10,000 cows so that they can meet Qatar’s dairy requirements in full by 2018. Domestic production of meats, dairy products, and crops increased by 400% from June 2017, the onset of Qatar’s diplomatic spat, to March 2018, according to the Ministry of Municipality and Environment. Nearly all (98%) of the demand for poultry is being met.

Wildlife
The wildlife of Qatar includes the peninsula’s flora and fauna and their natural habitats. The country’s terrestrial wildlife includes numerous small nocturnal mammals, several reptiles which mainly consist of lizard species, and arthropods. Aquatic animals primarily include fish, shrimp and pearl oysters. The desert and the shoreline form an important resting site for many migratory bird species during autumn and spring. Urban and agricultural developments have led to an increase in bird species.

Climate
Qatar lies in the northern hemisphere desert. The country has an extensive hydrological and meteorological data collection network which has been operative since 1972. The data are monitored by 25 manual and 25 automatic rain gauges and 3 manual and 3 automatic agrometeorological stations, spread over a wide geographical area. The arid desert climate is characterized by scanty rainfall with an annual average of about 80 mm over the period 1972–2005. Rainfall is extremely unpredictable and highly erratic, both in time and space. Because of its low intensity and variability, it is not considered reliable for supplementing irrigation and maintaining agriculture, yet it represents the main source of irrigation water in the form of recharge to groundwater. Other climatic characteristics are high temperatures during summer (> 40 °C), high evaporation rates with an annual average of 2 200 mm, very strong winds and high relative humidity (Abu Sukar et al, 2007). Evapotranspiration ranges from less than 2 mm/day in December to a maximum of 10 mm/day in June.