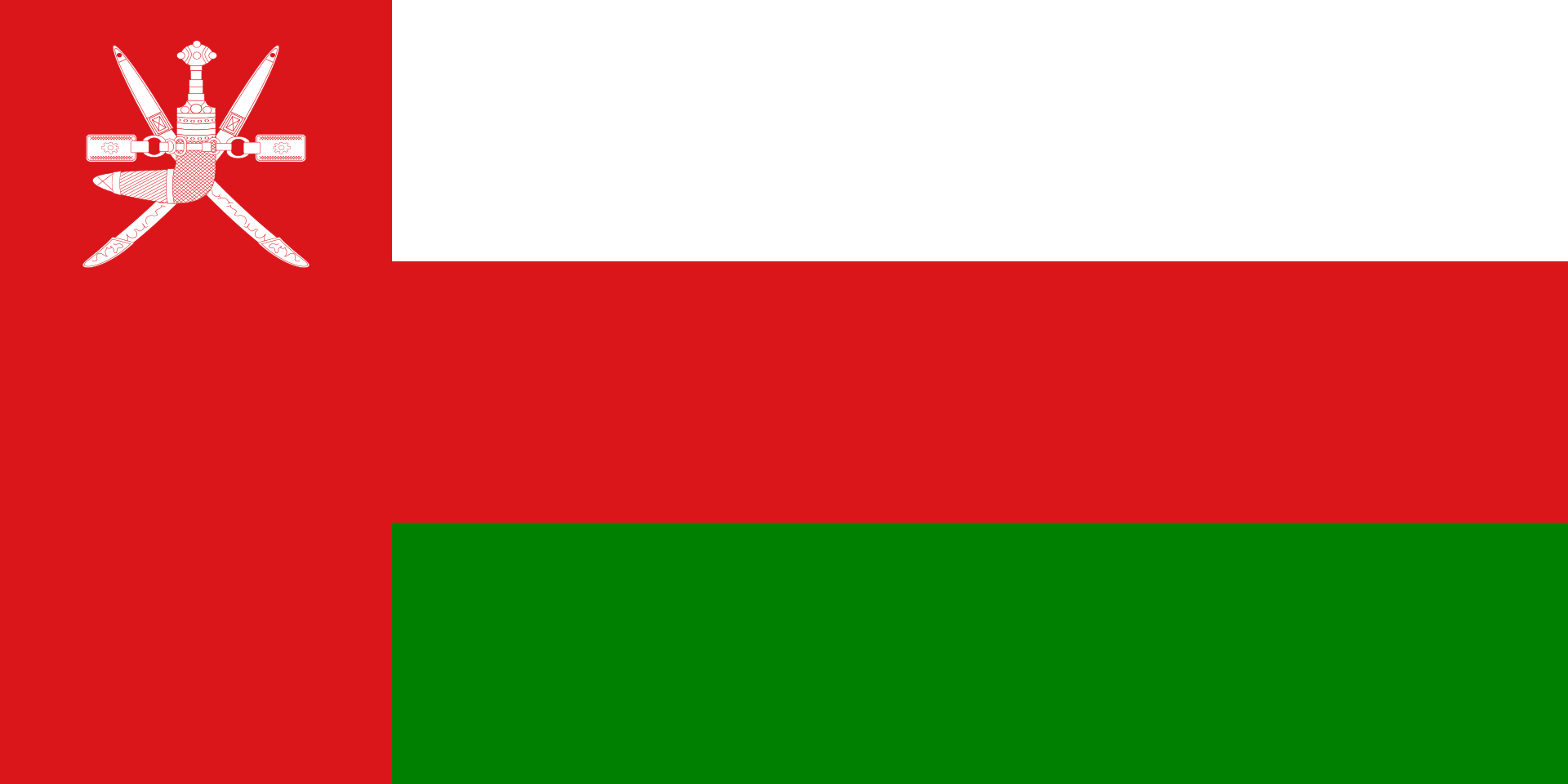 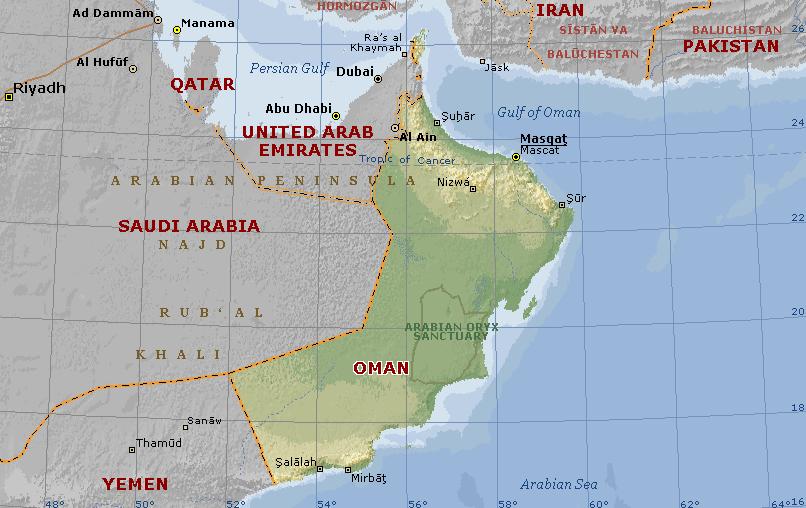 The Sultanate of Oman occupies the south-eastern corner of the Arabian Peninsula and has a total area of 309 500 km2. It is bordered in the northwest by the United Arab Emirates, in the west by Saudi Arabia and in the southwest by Yemen. A detached area of Oman, separated from the rest of the country by the United Arab Emirates, lies at the tip of the Musandam Peninsula on the southern shore of the Strait of Hormuz. The country has a coastline of almost 3 165 km, from the Strait of Hormuz in the north to the borders of the Republic of Yemen in the southwest, overlooking three seas: the Persian Gulf, the Gulf of Oman and the Arabian Sea. Administratively the country comprises five regions (A Dakhiliyah, Al Batinah, Al Wusta, Ash Sharqiyah and Al Dhahirah) and four governorates (Muscat, Musandam, Dhofar, and Al Buraymi). It can be divided into the following physiographic regions:

The soils are coarse-textured (sandy or coarse loamy) with a high infiltration rate. The soil pH is moderate to strong alkaline and the organic matter is very low.

The cultivated area was 58 850 ha in 2004, of which 12 793 ha consisted of annual crops and 46 057 ha of permanent crops (Table 1). Oman counts five distinct agricultural regions. Going roughly from north to south, they include the Musandam Peninsula, the Batinah coast, the valleys and the high plateau of the eastern region, the interior oases, and the Dhofar region. Over half of the agricultural area is located on the Batinah Plain in the north covering about 4 percent of the area of the country.

Agriculture and Livestock
Nowadays agriculture in Oman has witnessed a paradigm owing to the great development and the utilization of cutting-edge technologies in line with the quantum leap that took place in the field of agriculture worldwide. A great number of distinguished agricultural projects were executed in all governorates of the Sultanate, the owners of these projects have exerted considerable efforts and benefited from the latest technologies like the modern irrigation systems, greenhouse farming, and mechanized farming, all these methods brought about a dramatic increase in the agricultural yield coupled with high-quality produce. Today, agriculture accounts for a substantial amount of the country’s income from non-oil generated revenue, accounting for 26.5 percent of all non-oil/gas exports. It also provides livelihoods for tens of thousands of the country’s citizens with around 60 percent engaged in crop cultivation. As per the Agricultural Census figures, they help to produce 1,202,000 tons of crops from 72,000 hectares of cultivated land. With the outlined projected growth target of 2.6 percent is not only met but bettered, Oman’s agricultural sector is receiving an added boost thanks to newly introduced methods coupled with extensive research that has allowed for even greater productivity and generated greater additional revenue for this important part of the Sultanate’s economy. The indigenous livestock production in the Sultanate is on the increase. The production of red meat, poultry, eggs and milk now stands at 12,800 tons, 23,000 tons, 185 million and 135 million liters per year respectively. The number of livestock owners for cows, camels, goats, and sheep in Oman now stands at over 42,861; 14,947; 69,940 and 28,398 respectively. Similarly, the total number of animals in 2009 increased and it stood at 326,420 for cows, 126,970 (camels), 1.6 million (goats), and 379, 966 (sheep) respectively. The ministry has had good results with its Animal Feed Manufacturing from farm residue, artificial insemination program for cows, genetically improved selection of goats and sheep in association with the Sultanate’s four livestock Research stations in Rumais (Barka), Wadi Quriyat (Bahla), Jabal Akhdar (Nizwa) and Salalah.

Plants and Animals
There are 1,208 recorded plant species found throughout Oman, 78 of which are endemic to the country. Desert shrub and desert grass are the most commonly found fauna in the sparsely vegetated interior plateau. However, in Dhofar and the mountains, vegetation is quite rich during the rainy season. Coconut palms grow within the coastal plains and frankincense is grown in the hills which are covered in oleander and acacia.

Oman has established strict laws banning the hunting of a number of indigenous animals, many of which have become endangered ie the Arabian leopard and Arabian oryx. Nature reserves have been set up to protect the natural habitats of the animals that call Oman home. There are fifteen reserves in total and their main goals are to help conserve biodiversity and the natural heritage of Oman as well as to provide research opportunities, to help educate the population about conservation and to encourage ecotourism. Regulations are in place throughout Oman to ensure that environmental factors are considered before beginning new programs.

Despite being considered by many to be mainly a desert country, Oman has varied wildlife both on land and in its surrounding waters. Mammals such as the leopard, the oryx, gazelles, the tahr, the ibex, desert foxes, and wild cats. The waters around Oman are home to twenty-two species of whales and dolphins. They also house some of the best dive sites in the world, with the Hallaniyat and Dimaniyat Islands offering opportunities to see many species of colorful tropical fish and unusual hard and soft coral. Sea turtles are also attracted to the shores of Oman and breeding reserves are located at Ras al-Jinz and on the Dimaniyat Islands.

Approximately four hundred bird species have been recorded throughout the year in Oman. Due to the country’s location at the hub of three different geographical landmasses, Oman sees large swarms of migratory birds during their seasonal trip between their nesting habitats and the places where they spend winter. Some birds, especially waterfowl, travel about five thousand kilometers from places like Siberia. The best places to truly experience the best of Oman’s bird watching are on Al Hikman Peninsula, Masirah Island, the beaches of Al Wusta Governorate and the beaches and springs in Dhofar.

Climate
Generally, the climate is considered to be arid and semi-arid but differs from one region to another. It is hot and humid during summer in the coastal areas and hot and dry in the interior regions with the exception of some higher lands and the southern Dhofar region, where the climate remains moderate throughout the year. Potential evaporation varies from 1 660 mm/year on the Salalah plain in the south to 2 200 mm/year in the interior. In the north and center of Oman rainfall occurs during the winter, from November to April, while a seasonal summer monsoon, from June to September, occurs in the southern parts of the country (Dhofar) causing a temperature change.

The volume of the average annual rainfall of the country has been estimated at 19.25 km3, which is equal to 62 mm (Ministry of Regional Municipalities, Environment and Water Resources, 2005), varying from less than 20 mm in the internal desert regions to over 300 mm in the mountain areas.