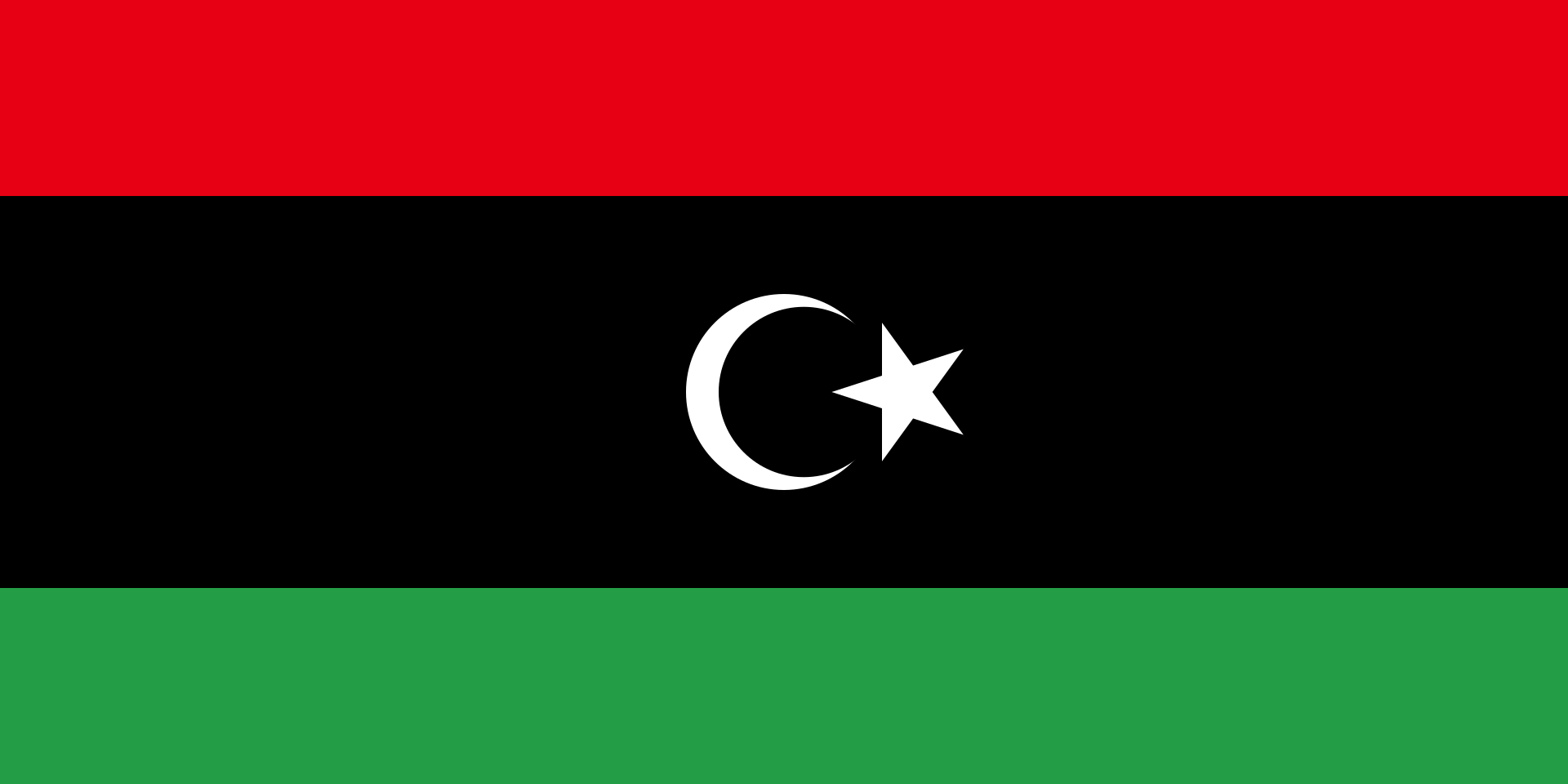 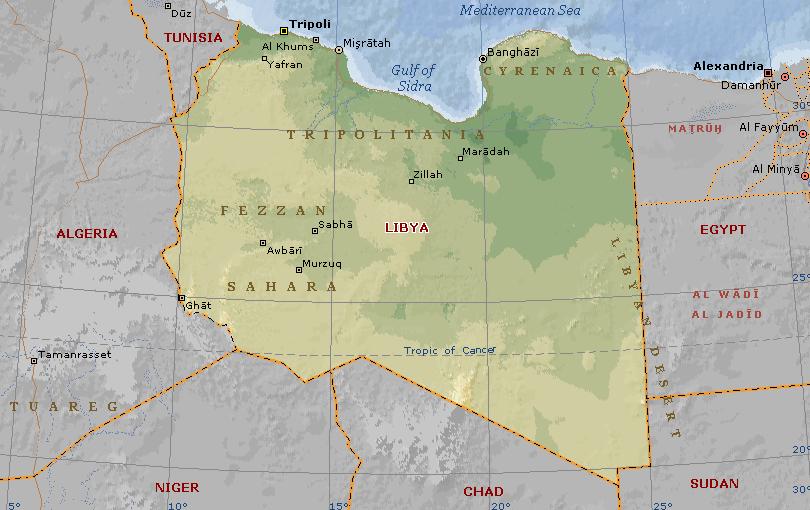 Libya and capital Tripoli have a total area of about 1.76 million km². It is bordered in the north by the Mediterranean Sea, in the east by Egypt, in the southeast by Sudan, in the south by Chad and Niger, and in the west by Algeria and Tunisia. Four physiographic regions can be distinguished:

Agriculture
Agriculture contributed 1.9 percent to the GDP in 2008 (WB, 2016) and was similar in 2010 (WFP and FAO, 2011). It has declined over time as the importance of the oil rose. The sector employs around 6 percent of the active population (GIA and UNDP, 2008). Most agriculturally productive land is limited to a strip along the Mediterranean Sea, where most rain falls. The two main areas of natural farmland are the high coastal plateau of Jabal al Akhdar in the north-east and the fertile coastal plain of Tripolitania and Cyrenaica in the north-west, where irrigation is still vital. There are some oases in the desert where water is available from shallow wells. Wheat and barley are the major cereals grown in the country. Other important crops include olives, grapes, dates, almonds and oranges. The main agricultural products exported are groundnuts, which represented about 50 percent of all agricultural exports. Livestock is also important with poultry (24.8 million estimated in 2008), small ruminants (5.1 million sheep, 1.9 million goats) and cattle (210 000). Only small amounts of meat and dry milk are imported, but the sector relies heavily on subsidized imports of animal feed. There are currently about 170 000 farm holders of which almost 40 percent are full-time farmers. Close to 90 percent of the farms are less than 20 ha and only 1 percent greater than 100 ha (WFP and FAO, 2011).

Pre-2011, the country usually imported 80 percent of its food consumption requirement and up to 90 percent of its cereal’s requirements. The main agricultural products imported are wheat flour, maize oil and milk, corresponding to about 40 percent of all agricultural products imported (WFP and FAO, 2011). The civil conflict deteriorated the food security due to the destruction of public infrastructure, disruption of social services, internally displaced persons and labor shortage resulting from the massive departure of foreign workers since the conflict, that was working in large part in agricultural activities (FAO, 2015). The Libyan government had extensive social protection and price subsidies including food staples, housing and energy (WFP and FAO, 2011).

Livestock
livestock and crop production are a significant source of food security for many Libyan households, which tend to be small producers. Along these lines, one key finding of this assessment is that despite agriculture’s relatively small contribution to Libya’s Gross Domestic Product (GDP) – less than 3 percent in 2011 – the proportion of Libyans engaged in some form of agricultural production is comparatively large (22 percent). In spite of this, participation in agriculture may have been considerably higher before the crisis, however, with approximately 7.5 percent of the population abandoning agricultural activities since 2014.

Flora
The plants found in the coastal zone are mostly herbaceous with an abundance of grasses. The most recorded species are the asphodel (a herb of a family of lily), Jabule, bougainvillea, and oleander. There are also many plants under cultivation such as citrus and olive. There is a narrow buffer zone along the coast where agriculture is practiced. This zone also has grasslands. Moving away from the coast, the topography changes to the Green Mountains (Libya), which rises to a height of about 800m. Influenced by the Mediterranean climate, the region has dense forest or maquis of juniper and lentic trees, and also bromegrass, canary grass, bluegrass, and ryegrass. Since rainfall in the area is scanty, the cultivated trees consist of figs and olives. In the Nafusah Plateau, grasslands form the dominant vegetation. Moving towards the south of the mountain range, the Sahara Desert environment dominates the region with limited cultivation of palm and fig trees around springs and natural oases. Date palms (near the oases), saltwort (used for making soda ash), spurge flax shrub, goosefoot, wormwood, and asphodel, Cyrenaica are also reported in the wild. Seagrass meadows are reported to cover 1500km between the Gulf of Sirte in Libya and the Gulf of Gabes in Tunisia.
There are nearly 134 vascular plant species that are specific to Libya.

Fauna
Along the coast, the Mediterranean monk seal is a well-known species. It has been listed in the IUCN Red List as Critically Endangered in Libya. In the Jbel Acacus region, from the rock artwork of animal forms seen in the far southwest of the country, it is inferred that African elephants, giraffes and rhinos inhabited the area in the past during the Ice age when the land was fertile. As of now, very few animals live in the area, like the striped hyenas (Hyaena hyaena), fennec fox, gazelles, wildcats and golden wolves. The cheetah is now extinct from the area. Reptiles and rodents are common in the sands of the desert; adder and krait are among the snakes reported. Red shrimp are reported from the Ubari Lakes in the Fezan area. The faunal species recorded include Canis Anthus, Vulpes vulpes, Genetta genetta, Felis Libya, Hystrix cristata, Delphinus delphis and Tursiops truncatus.

For more information about Flora and Fauna in Libya

Climate
The climatic conditions are influenced by the Mediterranean Sea to the north and the Sahara Desert to the south, resulting in an abrupt transition from one kind of weather to another. The following broad climatic divisions can be made:

Annual rainfall is extremely low, with about 93 percent of the land surface receiving less than 100 mm/year. The highest rainfall occurs in the northern Tripoli region (Jabal Nafusah and Jifarah plains) and in the northern Benghazi region (Jabal al Akhdar), these two areas being the only ones where the average annual rainfall exceeds the minimum value (250-300 mm) considered necessary to sustain rainfed agriculture. Rainfall occurs during the winter months (October-March), but great variability is observed from place to place and from year to year. The average annual rainfall for the country as a whole is 56 mm. Temperatures vary between over 40ËšC in summer to below zero in winter.