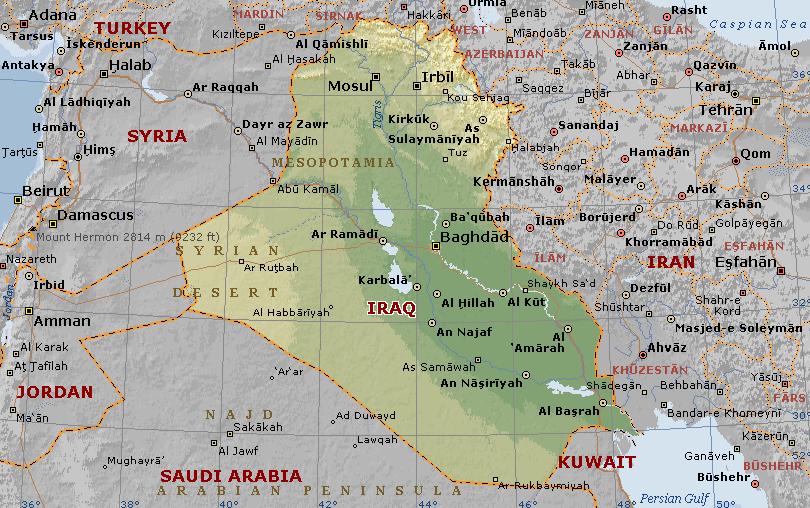 Iraq and its capital Baghdad, with a total area of 438 320 km2, is bordered by Turkey to the north, the Islamic Republic of Iran to the east, the Persian Gulf to the southeast, Saudi Arabia and Kuwait to the south, and Jordan and the Syrian Arab Republic to the west. Topographically, Iraq is shaped like a basin, consisting of the Great Mesopotamian alluvial plain of the Tigris and the Euphrates rivers (Mesopotamia means, literally, the land between two rivers). This plain is surrounded by mountains in the north and the east, which can reach altitudes of 3 550 m above sea level, and by desert areas in the south and west, which account for over 40 percent of the land area. For administrative purposes, the country is divided into eighteen governorates, of which three (Arbil, Dahuk, and As Sulaymaniyah) are gathered in an autonomous region in the north and the other fifteen governorates are in central and southern Iraq. This division corresponds roughly to the rainfed northern agricultural zone and the irrigated central and southern zone.

Livestock
raising is an important occupation for Iraq’s nomadic and semi-nomadic peoples. Sheep, goats, cattle, and poultry are the most commonly raised livestock animals. In addition, the world-famous Arabian horse is extensively bred.

Plant and Animal Life
Plantlife is sparse throughout Iraq. The natural vegetation consists mostly of bushes, shrubs, and grasses. Forests of oak and pine cover limited parts of the northeastern mountains. In the delta area are dense groves of date palm trees and thickets of reeds, which may grow to 6 m (20 ft) in height. Among the animals found in Iraq are gazelle and other antelope, wild ass, hyena, wolf, jackal, wild pig, hare, jerboa, and bat. Numerous birds of prey are found in Iraq, including the vulture, buzzard, raven, owl, and various species of a hawk; other birds include the duck, goose, partridge, and sand grouse. Lizards are fairly common.

Rivers and Lakes
Since ancient times, the Tigris and the Euphrates rivers have been vitally important to the region, the eastern extent of the Fertile Crescent. However, much of the Tigris-Euphrates system lies in Syria and Turkey, which draw heavily on both rivers before they reach Iraq. The two rivers flow through Iraq from northwest to southeast. They meet at Al Qurnah in southeastern Iraq to form the 170-km- (110-mi)-long Shatt al Arab. The Iraqi port city of Al Başrah is located on the Shatt al Arab, about 110 km (about 70 mi) before the river empties into the Persian Gulf.

Climate
Iraq has two seasons: a long, hot, and dry summer, lasting from May to or through October; and a relatively short, cool, and occasionally cold winter, lasting from December through March. Precipitation is sparse in almost all of Iraq.

Natural Regions
Iraq is a land of both barren desert and broad, mighty rivers; of both tall mountains and low-lying swamps. The country can be divided into four major regions: Mesopotamia, the upper river plains, the northeastern mountains, and the western and southern desert.

Between the lower stretches of the Euphrates and Tigris rivers lies the great delta plain of Mesopotamia. This plan covers roughly 117,000 sq km (45,000 sq mi).
the plain is poorly drained, and there are extensive marshes in the southeast.
The plain of Al Jazīrah (Arabic for “The Island”) lies between the upper Euphrates and Tigris rivers. This dry plateau region rises gradually to 300 to 500 m (1,000 to 1,500 ft) above sea level near the northwestern border with Turkey

The desert that covers most of western Iraq is part of the Syrian Desert, which extends into Syria, Jordan, and Saudi Arabia. The region is crossed by numerous wadis, wide valleys that carry water only after the infrequent rains of the desert.